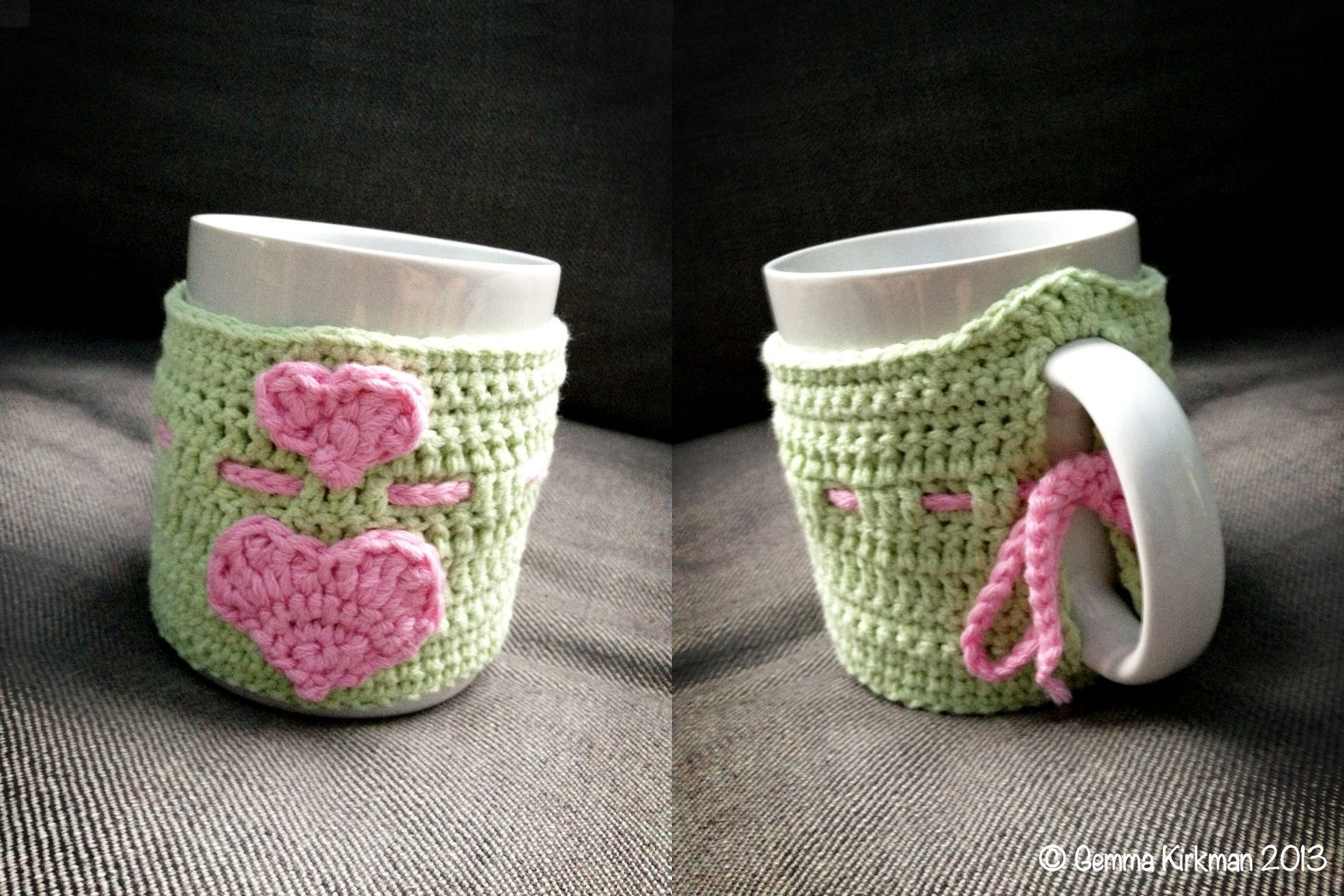 I love snuggling up with a nice cup of tea in the colder months, or after a hard day, or when sitting down to be crafty, or when watching TV… Ok, any time of day or night is a good time for a cuppa in my book!

I was sipping away to myself one day and came upon the decision to make mug cosies for me and my friend at work, for these three reasons:

So I went to work creating us some fun covers.

First, I tackled my friend’s cup which is one of those that curves as it goes down to the bottom. I wanted to make the cosy as, er, cosy as possible so I made a chain that would only just go around the base of the mug when stretched, joined it in a loop, then continued in a round to form the base.

It’s worth noting that I’ll do anything to get out of having to do any finishing or sewing pieces together at the end of my projects, so the cosy part of my cosy is made as a whole piece and its just the embellishments that I sew on after.

Next the hole for the handle. Instead of continuing in a round I turned instead for the next row and continued in lines, turning as I got to the end each time to leave the gap. For the curved cup I increased the number of stitches in each row at appropriate points as I made my way up the cup. Eager to see my results quickly, I also switched to double crochet (dc) rows about so it grew faster. Once I had a hole big enough for a handle, I joined the pieces once again and continued in a round for 2 rounds, making sure to leave enough room for my lip to drink from the mug (a mouthful of wool is not great).

I finally finished off the piece by crocheting a fanned lip/tag at the handle of the cosy so you can pull the cosy on and off easily.

For embellishments, I added a few hearts and joined them all up with a squiggly line, but there was still something missing…

I decided to add a tag, like what you would get if you were using a drawstring teabag to the side of the cup and put my friend’s name on it. For this I simply used some spare white fabric I had, printed my friend’s name onto t-shirt fabric transfer, ironed it on the fabric and cut it out. Worked a treat!

Here is the finished article:

The mug cosy for me was slightly easier to make as it was a straight mug. I used exactly the same technique as before just without having to do any increases. I chose a light green colour for myself and added two hearts, which I have to admit turned out better than my first attempt at hearts after I had a rethink about the pattern. The clever thing about double crochet is that it affords a bit of stretch and space between each strand, which lent itself nicely to the addition of a little chain stitch ribbon/bow I added at the end and just passed through the spaces.

This is how mine looked from the front and back (I didn’t add a tea tag to mine):

The handle angle shows better the extra lip I added to allow the cosy to be taken off the mug more easily.

And there you have it! I haven’t tested the longevity of the heat of the tea, but it certainly satisfies the fun and prettifying aspects of the original brief and it’s snugglier to hold than porcelain. Hope you like them, if you are interested in any more detail on how I made them let me know!